An Answered Prayer: 4 Years in the Making

I remember the day we chose Ronabel like it was yesterday.  It was a Sunday in July in 2011. A representative from CFC, now called Unbound, gave a talk at our church about all the underprivileged kids around the world who can't go to school because their parents can't afford to send them. He talked about the poor who couldn't afford to feed their children much less send them to school.  He talked about how much we have in America and how little it takes to make a difference in the life of another child in a foreign country.

After Mass, our kids insisted that we sponsor a child.  We walked to the back table where all the pictures of the children needing sponsors were laid out.   Olivia looked over all the pictures carefully and chose a girl her age that shared Isaac's birthday.  Her name was Ronabel, and she lived in the Philippines.  Olivia immediately asked when we could meet this little girl and give her the school money.  Travis and I tried to explain how this sponsoring thing worked and that we would never be able to meet her because the Philippines was on the other side of the world.  (Yes, I know. God is very humorous.)

Olivia, 8 years old at the time, did not like that answer at all.  So right there in the church foyer, she told us that she would just pray and ask God to get our family to the Philippines.  I smiled sweetly at her and told her to go ahead and pray for that.  I loved the matter of fact, childlike faith she had.  But my realistic, grownup faith knew that this was one prayer that would not be answered.  (Boy, did I have a lot to learn from my 8 year old!)

When we got home we put Ronabel's picture on our prayer board.  During the following year, we prayed each night during family prayer for Ronabel and her family.  The next year we received an updated picture for our board.  Olivia continued to pray that our family would one day go to the Philippines and meet Ronabel.  And I continued to believe that that was impossible.  I may have even discouraged her from continuing to pray for that, so that she wouldn't be disappointed and lose faith when it didn't happen.  (I know!  I've added that to my long list of parent fails.)

Well, fast forward to December 2013.  We were in Mexico finishing up our missionary training when we found out that we were being sent to the Philippines for our first year as full time missionaries.  One of Olivia's first thoughts was Ronabel!  She said, "Now we can meet Ronabel!"  My adult like faith still said that this was going to be impossible.  I explained to her that the Philippines was like the U.S., very big, and that just because we are going to the same country doesn't mean that we can just travel to any place in that country.  Plus, we didn't even know which island Ronabel lived on.  (Yes, I know. I still had a lot to learn!)

Fast forward again, July 2014, we were living in the Philippines and received an email update on Ronabel from Unbound.  Olivia said, "Let's go find her!"  The thought finally crossed my mind that maybe, just maybe this could be possible.  I logged on to the website and did some research just in case it was possible to find her.  I found that Ronabel was part of the Quezon project which was located near Manila, the capital city that we fly in and out of.  (Now, this is where I begin to believe.)

I emailed Unbound and inquired about meeting with Ronabel.  They sent back a lengthy application for us to fill out and send back.  The application required a specific date, flight details, hotel reservations, etc.  We soon realized that a visit was still out of our budget even thought we were now in the same country.  We decided that we could try to schedule a visit the day before we flew back to the U.S. the next time since we usually end up spending a night in Manila anyway due to flight schedules.  Well, we had to leave the Philippines unexpectedly due to issues with the pregnancy.  We didn't have enough time to schedule the meeting with such short notice.

Fast forward, June 2015, we were about to leave the U.S. to return to the Philippines.  Olivia reminds us about meeting Ronabel.  Again, I tell her that I don't think there is enough time to set it all up just as a letter from Ronabel arrives in the mail telling us how excited she is that we live in the Philippines now and that we are going to be visiting her soon. (This is when I finally decided to join Olivia's praying for a miracle meeting.)

On July 11, 2015, 4 years (possibly to the day) later, God answered Olivia's prayer.  We met Ronabel, her mother, and three of the social workers that work in Quezon. 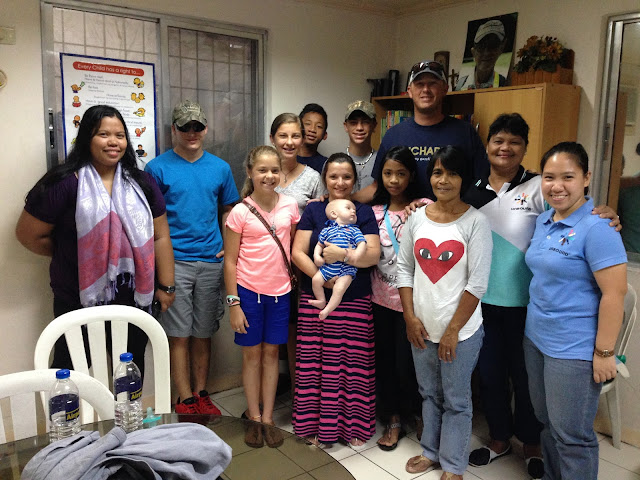