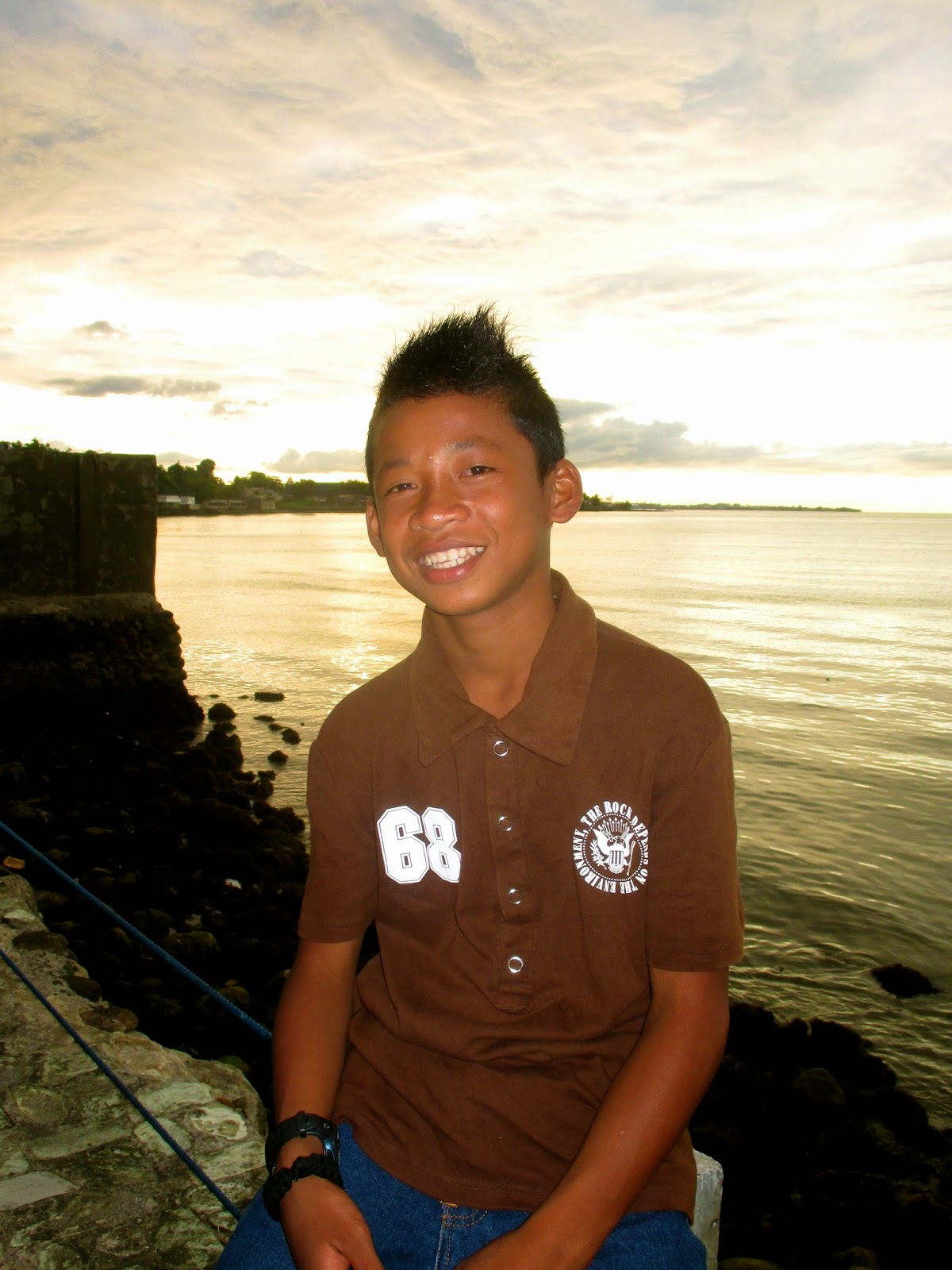 This is Joshua.  He was one of the first kids at our gate when we arrived in the Philippines back in February.  He spoke no English, but his smile captured my heart from the very beginning.  He was always at our gate waiting for us to return from where ever we had been no matter what time of the day or night, so that he could come in the yard to play with our kids or work for us.  He was constantly offering to sweep, clean the yard, cut the grass, trim the bushes for just a few pesos or for some food.

Joshua had a bad reputation in the neighborhood and was one of the kids that we had been "warned" about, but there was something in his smile and something in his eyes that told me he just needed some love and guidance.  We were told not to let him in our yard and especially not our house, because he couldn't be trusted. But of course, he was one of the first ones to be invited to come into the yard.  And was one of the first ones to join us at our table inside for a meal.  He quickly became a regular at our house and at our table.  And eventually began sleeping over often.

I soon found out that he was not enrolled in school and hadn't been to school since second or third grade.  I also discovered that he had a great desire to learn, so I began teaching him Math a few times a week.  Yes, the English teacher started with Math!  He spoke NO English, and I spoke NO Visayan.  Teaching addition and subtraction was easier!  We soon moved on to learning colors especially while playing UNO, his favorite game.

I knew from the very beginning that Joshua was one of the reasons that God had sent us to the Philippines and had put us in the big blue house on the corner in Avinca Village.  But being the teacher, I thought that it was to help him get back into school.  So, that became "my" mission, to get Joshua back into school.

But as I began to question him about meeting his parents to get him back in school, he shut down.  He stopped coming around for a few days.  I began to question the neighbors, and I found out that his mother had died shortly after delivering him leaving behind five other siblings and this newborn.  Joshua's dad lived in another town far from Malaybalay in order to find work to support his family.  Joshua had been raised by an aunt as a baby, then lived with his dad for awhile, and was now living with one of his sisters who was struggling to support her own family.

I finally got Joshua to introduce me to his sister, so that I could talk with her about helping to get him back in school.  She was so grateful for the change she had seen in Joshua lately and was eager to get him back in school.  We found an alternative school with an elementary program for Joshua to enroll in so that he could catch up to where he needed to be in order to enter high school next year.  We agreed to help with transportation, school fees, lunch, etc.  Mission Accomplished!

Or so I thought.  By the time all of this happened, Joshua had practically moved into our house and had become part of our family.  Our kids began talking about adopting him and taking him back to the US with us.  We told them how crazy that was even though Travis and I both secretly longed to do that very thing.  One day while we were discussing it, we recalled the family retreat that we had had not long after we had arrived in the Philippines.

During that retreat, we received many verses about taking in strangers, taking in foreigners, and helping widows and orphans.  And several verses from the book of Joshua.  We remembered how even way back then during the retreat our kids had mentioned that God wanted us to adopt Joshua.  After recalling this, Travis and I decided that we needed to really pray about this and whether it was God calling us to adopt again.

Soon there was no doubt that God was asking us once again to accept another person's child as our own which we had done already.  But we had no idea how to even approach the subject with Joshua's family, but God had already taken care of that too.  Just as we were wondering how to get in touch with Joshua's dad that lived far away, he showed up in the neighborhood for a visit.  God had sent him right to our street.  We set up a meeting to talk with  Joshua's father, one of his sisters, and one of his brothers about his schooling and his living arrangements.

We were worried that his dad had come back to town to get him or to tell us that he needed to move back in with his sister.  He had already become part of our family, and we didn't want to loose him.  Our biggest fear was that all the signs leading us to wanting to adopt Joshua had not actually been from God but from our own longing for more children.

But as the "meeting" began, God revealed that He had already set this idea in the hearts and minds of Joshua's family.  Our wanting to adopt Joshua was a relief and an answered prayer for their family.  This family had been struggling for so long just to put food on their table each day.  With everyone working or searching for work, Joshua had been shuffled from place to place. And with no one to really look out for him during the day, he became a wanderer and eventually quit going to school and began to hang out with a not so good crowd.

His family had all seen the excitement he was now showing about learning and going to school, but also the change in his attitude and behavior.  Everyone was in agreement that the best thing for Joshua would be to be adopted by our family.  They all wanted a better life for him.  It was one of the saddest things I have ever listened to.  Because they loved him so much, they were willing to give him up so that he would have a chance at a better life.  By the end of our visit, there wasn't a dry eye.

The next step was to talk to Joshua about all this.  Again, we had no idea how to bring this up to him, especially since we had the whole language barrier thing still going on.  But again, God had a plan already set in motion that helped us approach the subject very easily.  After an emotional wedding ceremony where the priest talked about what a Catholic family should look like, Joshua told us that he wanted a family like the priest had talked about.  He told us that we were the only people to show him love and kindness no matter what.  He shared how we were the first people to invite him into our house and to our table.  He explained how much it meant to him that we trusted him, invited him into our family, and loved him despite what others had said.

Then he told us that the only thing he ever wanted was a mother to hug him and love him.  And then added that he wanted me to be that mother.  I can't begin to describe my emotions at that point.  Those were the saddest, most heart wrenching, yet the most beautiful words I have heard come out of a child's mouth.  I could not speak, so I did the only thing I could do, the thing any mother would do,  I grabbed him and hugged him.

In the past few weeks, we have been meeting with a lawyer to figure out if this adoption is possible and what we need to do to make it happen.  We have run into several roadblocks and speed bumps this week.  We are asking that you add us and Joshua and his family to your prayer list.  Please pray that God's will be done and that the transition will be a smooth one for all of us involved.  Pray that God will guide the lawyer to the quickest and easiest route for this adoption.  We know that God has already planned another Day the Lord Made Just For Us.


***We have also discovered that international adoptions cost a lot more than our domestic one did.  If you feel called to help us with application processing fees and court costs that we will encounter along the way, you can donate to our mission fund at http://www.fmcmissions.com/portfolio/travis-and-melissa-seilhan/gallery/missionaries/.  Just type Adoption Fees in the comment box.