And the Blessings Continue...

In my last post Blessed Beyond Belief, I shared how God had been answering our prayers and blessing us way more than we deserve.  Well, He has not stopped pouring the blessings upon us.  He has continued to show us that this is our family's vocation and that He will take care of our every need.  For those of you still doubting our call to missions or still worried about us, keep reading.  After this, you can't doubt or worry anymore!

Since I last wrote, we were able to sell our car thanks to my dad and his wonderful friends at Gulf Coast Autoplex who offered to buy our car.  We had been trying to sell it for a few weeks with no luck.  We were upside down because the car was new.  We hadn't consulted God about His future plans for us when we bought it two years ago. Lesson learned:  Always consult God before every purchase no matter how big or how small.

After selling the house, we began to pay down the car note with all the extra money we had.  But it didn't seem to be making a big enough dent.  We still had other bills to pay off before Travis's last day of work next month; we desperately needed to get rid of the car note. So, we prayed harder for God to send someone to buy it for a reasonable price that wasn't too far from what we owed.  And as always, God heard our plea and sent the awesome guys at Gulf Coast Autoplex to us to make an unbeatable deal.

With that huge burden off our shoulders, we could then focus on the other three bills that needed to be paid off before entering Family Missions Company's Intake (missionary training) in September.  We soon realized that we had kept the car for so long that it would be impossible now to be able to pay off the other bills with only a few paychecks left.  So, we planned another bake sale fundraiser at a neighboring parish where we often attended weekday afternoon Masses..  We planned to use that money to help "pay down" that note.  We baked and baked and baked.  And then prayed and prayed and prayed that we would make enough money to put a dent in that loan.

We were blown away when we counted up the money and realized that we would have enough to pay off the whole loan. The amount we made was almost the exact amount we owed.  It was so crazy!  Only God could have planned and orchestrated that.  First came the tears of joy, and then came the disbelief that God would do this for us---especially after all the poor decisions we've made regarding our finances over the years.  It was almost too good to be true.

With that bill out the way, I sat down once again looking at our finances.  I knew we would be fine while in missions because God had already proven that by the awesome donors and monthly sponsors He had sent our way. I wasn't worried about the "later" anymore, but the "now." We still had two more bills that needed to be taken care of before Travis officially quits his job next month.  I figured out that he would have enough paychecks to pay off one of them, but that there was no way that we'd be able to finish paying off my student loan.

Yes, I've been out of college for a LONG time, but we had to defer my student loan for a few years back when our youngest was born.  She needed numerous surgeries, and I needed to stay home to care for her.  We were lucky to be able to defer that payment during that difficult time, but now it sat as a big bump in our path to becoming missionaries.  We didn't want to have to defer it again, but I couldn't think of any way to raise that much money in just a month.  Even though the payment wasn't much, we were going to be without an income for the next two years and wouldn't be able to pay even that small amount.

I wondered if we could possibly take it from our monthly missionary stipend once we were in the mission field, but that would either take food from the mouths of our kids or from those we were being sent to help.  We couldn't do that; we'd have to defer it again.  I looked one last time at how much we owed, how much Travis would make these next few weeks, and figured out the amount we would need to raise or have fall out of the sky before Intake.

Then I prayed for God to show me a way to raise this money by September or for the student loan company to grant the deferment when we told them why we needed it.  I knew that it would work out one way or another, God had already shown us numerous times that He could move mountains.  I just didn't realize that He'd take care of this one the next day!

Before I even had a chance to sit down with Travis and give him the "bad" news, we received a call from the priest at the parish where we had just had the bake sale.  He told us that someone had given him a very generous check after Mass to give to us.  As he revealed the amount of the check, I almost fainted in the driveway.  It was the exact amount that I had just figured out two days ago that we would need to pay off that student loan---the amount that only I knew.  And it wasn't a number that someone would normally donate.  It was a rather "odd" number for someone to pull out of the air.  It was definitely divine intervention.

God is definitely making sure that we know without a doubt that He is calling us into full-time missions.  And most importantly that He has our back!


*** A HUGE thank you to the anonymous donor!  Thank you for listening to and obeying the prompting of the Holy Spirit and being the answer to my prayer!  We are praying that God blesses you a hundredfold for your generosity!

Are You Man Enough?

A post by my husband Travis who IS man enough... 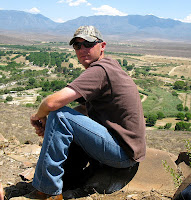 Since becoming a father, my biggest fear has been that my children will fall away from God and the Church.  I know that the best way to teach is by example. Jesus tells us that in John 5:19, when he says, “Amen, Amen I say to you, a son cannot do anything on his own, but only what he sees his father doing; For what He does, his son will do also.” 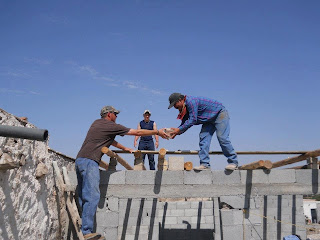 After reading that verse, I have often worried about whether I’m a good enough example for my kids to follow especially my two teenage boys. I want them to grow up to be “Men of God” not men of this world.   I always felt that there was something else I should be doing to show my boys just what it meant to be a Christian man, a follower of Christ.  I always felt like there had to be more to the Christian life than just going to Mass, saying your prayers, and being a “good” hardworking person. 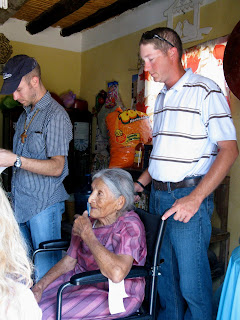 There is no better place to lead by example than in missions.  I learned this while on a short term mission trip with Family Missions Company in May 2012, and God confirmed it to me on our second mission trip the following November.  Being in Mexico, serving the poor, and bringing the Gospel to them, changed me in many ways, but most importantly, it confirmed the importance of a Father’s example to his children. 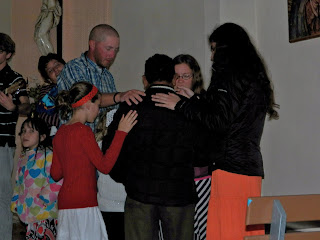 Seeing those rancho chapels
empty of men and hearing the prayers of the women for their husbands and children, made me see the great need for more men in missions.  Strong Christian men are desperately needed to help lead these lost men back to God, so they can become the Christian leaders for their own families.   As men, we must step up and show the love of Jesus to the world because it is in desperate need of that these days.

Think you're man enough?  Watch this video and share it with other men who may be read to step up and be real Christian men.