The Day the Lord Made Just For Us

This past Friday morning was not our usual "sleep-in a little later than usual" Friday.  We actually rose earlier than we do on a normal school day.  We quickly grabbed breakfast and put on our "Sunday Best" instead of our "Friday Casual."  It was the day that we had been waiting for, praying for, the day we thought we'd never see...Adoption Day!  After three very long, very heart wrenching, very stressful years, it was finally going to come to an end.  Our foster son was going to officially be ours; no more worrying about what the next court hearing would bring.

We left the house all giddy and met several of our family members at nearby gas station to begin the caravan to the courthouse.  I joked about being in labor, yelling occasionally with a "contraction", and the boys laughed about me "birthing" a 5 ft, 4 inch, 95 pound 13 year old in a few hours.  The 35 minute drive seemed to take hours, but we finally arrived at the courthouse---four carloads full!

Next, came the hard part, the sitting and waiting for our turn. 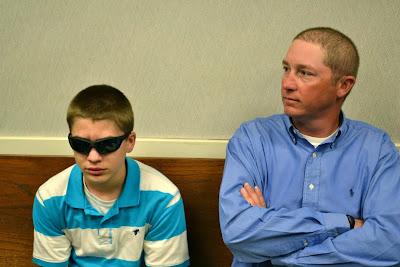 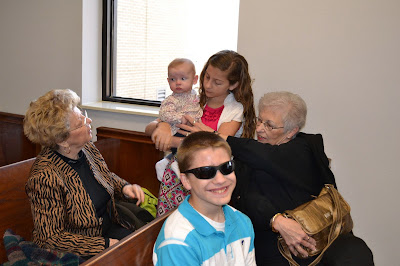 At least this time, we had lots of family to keep us company while we waited.

Finally, they called us into the courtroom where the judge questioned Philip to make sure that this was what he wanted.  After she confirmed that being adopted into our family was what he desired, she signed the papers!  His name was changed.  He was officially ours.  No one could try to take him away from us.  After three years of fighting for what was best for Philip, it was decided that we were what was best for him!

This would be the last time we would have to appear in this courtroom.  The judge that had seemed so cold throughout our three year journey seemed to be just as relieved and excited for this case to finally be over and for Philip to finally have closure.  She quickly came down and posed for pictures with us and allowed the kids to go sit in her chair which they had secretly been hoping to do all morning. 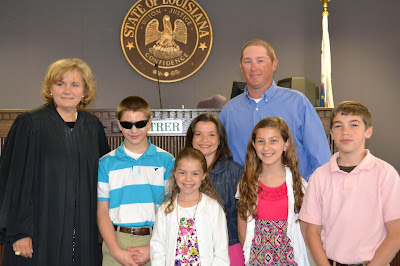 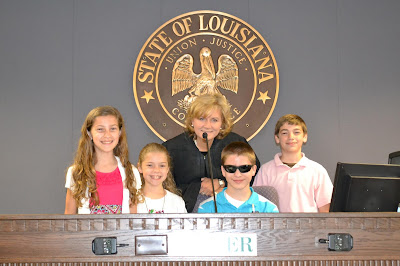 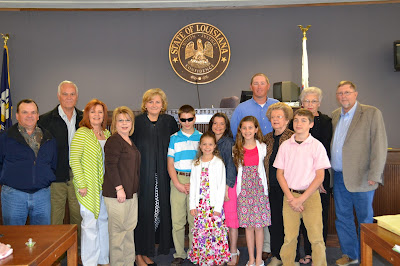 I'm pretty sure that we all floated out the courthouse afterwards since this huge weight had been lifted from our shoulders, but the day wasn't nearly over.  We still had something even more special coming later that day.  Philip was going to be baptized into the Church that afternoon.  Our awesome pastor had agreed to hold a special Mass that day so that Philip would "not have to wait any longer."

After a celebratory shopping trip and lunch, we headed back home to prepare for the next ceremony.   He had chosen to wear a suit for this very special event.  He looked so handsome!  But best of all he was wearing the biggest smile that I had ever seen him wear.  When we arrived at the church, we found it already filled with family and friends waiting to celebrate this special Mass with us.  Some had left work early to be there.  Some had traveled all day just to be there.  We felt so blessed.

As the first reading began, my eyes began to fill with tears.  The reading was Saul's conversion and baptism. (Acts of the Apostles 9:1-20)  Philip's conversion had happened about a year after he moved in with us about two years prior to this day.  He had been sitting in on many family rosaries, daily and Sunday Masses, retreats, youth group talks, etc.  He knew he needed to be baptized.  He knew he wanted to receive Jesus.  His devotion to his personal prayer time, to reading the scriptures, and to learning about the faith, assured us that his eyes had been opened and God was preparing him for something, something BIG.  This reading was perfect for today---conversion and baptism!

Then came the responsorial psalm.  The psalm was Psalm 117.   Yes, praise the Lord for His faithfulness and mercy!  Perfect!  But the people's response to this psalm was from Mark 16:15.  As it was being read, I saw a huge grin come over our oldest son's face who was serving on the altar.  "Are you kidding me?" I thought as I chuckled.  This was the verse that had been appearing everywhere during our discernment of missions.


He said to them, “Go into the whole world and proclaim the gospel to every creature."

One of the prayers that we had had for months now was, "Lord, IF you are REALLY calling us to be foreign missionaries, we can't go without Philip, and we can't take him unless he's legally ours, so handle this so that we know that you are really calling us."  This responsorial was our answer and our confirmation---He was really calling us into foreign missions and He had taken care of that roadblock earlier that day.

One would think that those two were enough mind blowing readings for the day, but God wasn't quite done.  He still had some showing off to do.  The day's Gospel reading was none other than John 6:52-59.


...Jesus said to them, “Amen, amen, I say to you, unless you eat the Flesh of the Son of Man and drink his Blood, you do not have life within you. Whoever eats my Flesh and drinks my Blood has eternal life, and I will raise him on the last day...

Not only was Philip going to be baptized at this Mass, but he would be making his First Holy Communion too.  He would be eating Jesus' flesh and drinking His blood for the first time.  This Gospel was not another "coincidence" either.  It had also been hand picked by God Himself for just for us on this very day.

Numerous times these past few months, the evil one has tried to make us doubt our Catholic faith and our belief in the Eucharist.  Many times lately I have prayed for God to take away these doubts planted to distract us from our call to be Catholic missionaries.  My prayer has been "Lord, I believe, take away my unbelief." (Mark 9:24)  That Gospel reading was the answer to my prayer.  God was confirming to me that the Eucharist IS the body, blood, soul, and divinity of His son Jesus Christ.

This was the day that the Lord had made just for us. 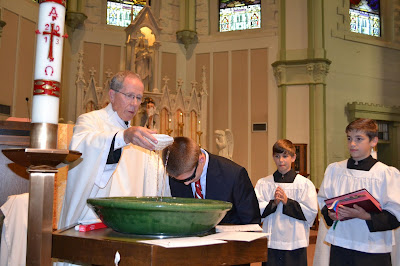 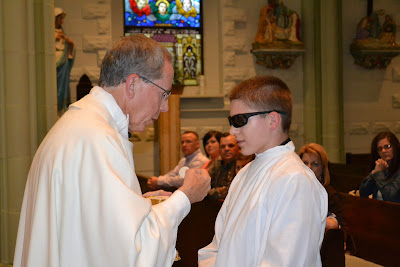 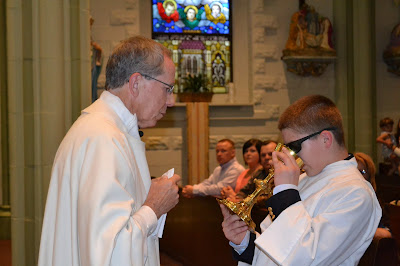 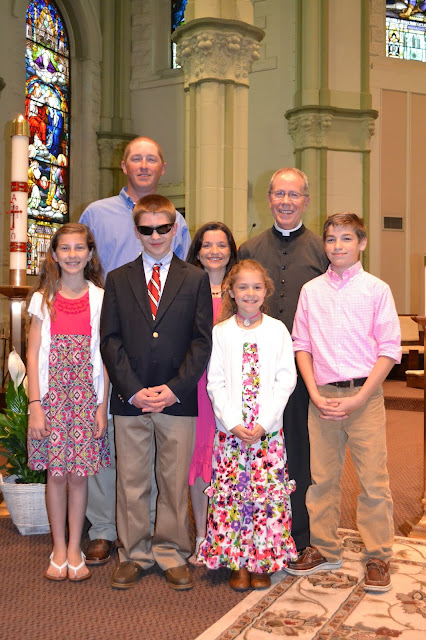 If you'd like to help support our family's foreign mission, you can send tax deductible donations to Family Missions Company, 12624 Everglade Road, Abbeville, LA 70510.  Please write "Seilhan Family" in the memo line.  Or donate online at http://www.fmcmissions.com/portfolio/travis-and-melissa-seilhan/.  You can donate once or set up a monthly donation to our fund. Please know that donors/benefactors are prayed for daily.
Posted by Unknown 10 comments: Links to this post

Praise Him in the Storms

This morning I went out to find our oldest son who had disappeared from his schoolwork to tend to his chickens.  (He is now in the fresh egg business which is much more interesting and profitable than school work.)  While outside, I noticed a large limb that hangs over our bedroom swaying in the wind.  I knew a storm was coming in tonight; the winds were already pretty strong.  I said a quick prayer as I looked at the swaying limb, "Please, Lord, don't let that branch fall on my bedroom tonight during the storm."

I then hollered for my son to come out of the barn and back to the house.  I went about my day schooling, baking for our fundraiser, and running kids here and there.  Later, that afternoon, I could hear the winds picking up, so I sent our son back outside to pen his chickens up early before the weather got too bad.  A few minutes later he comes running back into the house to tell me that there was a "tree" on the house!  I immediately ran to my bedroom to see if it had come through because I knew exactly what limb had fallen without him telling me.  No sign of any damage in the bedroom "Praise God!"

I then ran outside to see how bad it looked from the outside.  That's when I found this: 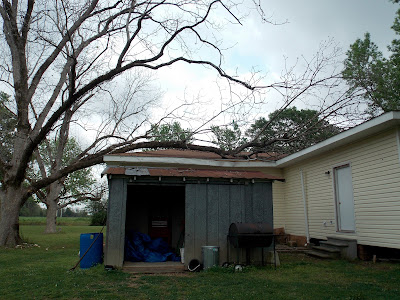 I panicked as a gust of wind blew the leaves into the air.  It was 2:00 in the afternoon.  I had a huge limb on my roof.  The roof looked like it had several holes in it.  My husband was in the air somewhere between Houston and Wyoming and would not be home to take care of this before the rains began.  The storm was going to be here soon with lots more wind.  And LOTS of rain. And we are trying to sell it.  And I have people coming to see it later this week.  And so what do I do now? 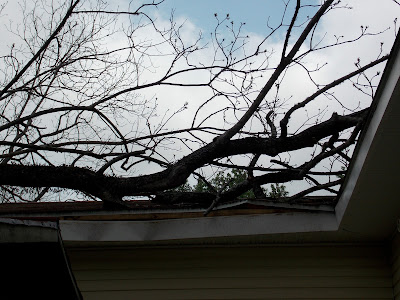 I thought about crying and asking "Why?" but then I remembered my prayer.  "Please, Lord, don't let that branch fall on my bedroom tonight during the storm,"  and my Facebook post this morning about how God takes care of his missionaries. So instead I said, "Thank you, Jesus! Praise you, Lord, for not letting it fall during the night during the rain." I left the pity-party before it ever got started and began to make a few calls and sent a few texts.

Within 15 minutes, a neighbor owning a tree service business (Beaver Tree Service----awesome guy) shows up at my house to help remove the tree limb from our roof.  My dad shows up (like he always does) and has already called a carpenter (Paul Dupuis-another awesome guy) to come patch the roof for me before the rains start. 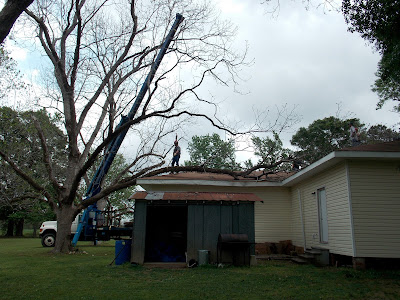 The next thing I know there is a huge crane in my yard lifting the giant limb from our roof, and there are several men up there assessing the damage it left behind.  I ran in to check on the baking situation (Missions Fundraiser was already underway!) and came out to find that they had already removed the part of the roof that was damaged.  I offered them the blue tarps from the shed, but they didn't need them.  They weren't just patching it for the night.  They were fixing it!

In less than 3 hours from discovering the fallen limb, the tree had been removed, the kids had hauled off all the little branches, and the roof on that part of the house had been replaced!  It was something that only God could have orchestrated in such a short time.  I am slowly learning to praise God not only in the clear skies, but in the storms too!

Posted by Unknown No comments: Links to this post