How Did That Happen?

In the last 10 months, I have sat down to blog several times.  The first blog was going to be to announce the bundle of joy we had on the way.  The other blog that I sat down to write several times these last two months was to announce the arrival of that bundle of joy.  But each time I sat down to write one of those, I realized that before I could make those announcements that I needed to fill in the gap especially since the last time I wrote about our "personal" life was when I talked about the "pill" and mentioned my husband's vasectomy. But like that blog, this blog, even though it is a beautiful story, was/is a difficult one to write.  But here goes...

After writing "What Almost Destroyed Our Marriage" three years ago, the communication line between my husband and I really began to open up especially once we began receiving emails from people all over the country with similar stories.  As friends and strangers began to share their stories with us, we began to really seek what God wanted from us.  Was it just to be support for others like us?  Was it just to get the word out about the dangers of the "pill"?  Or did He have bigger plans for our story?

During this time, our family was also being called to a radical life of poverty in foreign missions. Read about that crazy story here.  The end of 2012 was a wild ride for our family as we began to sell everything we owned to follow God's call to become a missionary family.  But as we prayed and followed God's lead, we knew that He had other plans for our family first.  The stories from the mission field we were hearing from our new missionary friends about how governments in other countries were trying to control the population by handing out birth control pills and forcing sterilization made our hearts ache once again for the children that we had missed out on having.  That, and being surrounded by families with 6, 8, and even 10 children!

We knew in our hearts that we could not enter the mission field to preach and teach the poor how wonderful God's plan for the Christian family is with this huge black cloud hanging over our heads and hearts.  With the lines of communication opened, we began to really talk to each other about our feelings and desires.  We discovered that we had both secretly thought about having the vasectomy reversed, but neither of us had the courage to bring it up to the other.  We began researching and were devastated to learn just how expensive it was.  We knew that the insurance that so willing paid for the first surgery would not pay for the one needed to correct the mistake.  We were so disappointed because we would never be able to afford the reversal especially as missionaries, but we just continued to pray for God to show us the way if that is what He wanted for us.

In the meantime, we continued to sell our belongings and prepare for a life in missions.  It was so freeing to let go of "stuff" that had been weighing our lives down even though we didn't even know that it was.  We began really study our bible and the Catechism of the Catholic Church where we once again faced God's plan for marriage and family.  And once again we focused on praying for Him to show us what we were supposed to do.  We had gone to confession numerous times.  We had talked to several priests over the years and were assured of God's forgiveness.  We had even forgiven each other, but I don't think either of us had really forgiven ourselves.  We still had this baggage weighing us down.

One evening on our "Date Night", we got stuck in traffic.  While at a stand still, my husband began searching the radio for something to listen to that was decent.  He stopped on Radio Maria.  As we listened to the guy talking, our jaws dropped as we listened in silence as this doctor talked about vasectomies and the physical, emotional, and spiritual effects of them.  I was just about in tears as the man described so much of our life.  Then he began to talk of reversals and how they can begin to heal all those physical and emotional wounds.  But the best part was when he began to speak about his "reversal ministry" which made it affordable for couples to do.

I immediately began "Googling" him and his practice only to find that he was very far away from our area.  It would cost more to fly to him than it would for the surgery.  Once again disappointment began to set it when he mentioned that there were other doctors across the U.S. just like him that are doing reversals as a ministry not as a business.  He mentioned several in the Texas area which is not far from us.

We had reached the restaurant, but had not gotten out the car.  We sat and listened to the rest of the program before either of us attempted to move.  Once inside the restaurant, we began to discuss all the things that were said and uncovered so much pain that each of us had buried so many times.  But this time as we uncovered them, we had hope.  I googled all the way home that night.

On that next Monday, I called the doctor's office in Texas for information.  After a few days of prayer and lots of discussion and a visit to our priest, I called and made the appointment.  We told very few people what we were about to do.  Most just looked at us like we had just confirmed that we were indeed crazy.  (Remember, we had also just announced that we were selling everything we owned to go live in a foreign country with the poor.)  The hardest part which ended up being the most blessed was telling our four children.  Having to explain what a vasectomy is when you've been preaching and teaching them about being pro-life is not a picnic, but explaining to them that you are about to correct the problem and watching their faces light up is something I will never forget.

We arrived in New Braunsfel, Texas, for our consultation with Dr. Hickman the day before the scheduled surgery and knew that this was the doctor that God has chosen for us.  He began with a prayer and then began to discuss God's plan for creation and procreation with us.  He said all the things that we had been saying to ourselves and each other.  We shared our story with him about how we got to this point, and he was so kind and understanding.  He then explained the procedure that would take place the next day.  It was not going to be a walk in the park.  The reversal was much more complicated and painful than the vasectomy was and would take a little longer.  We prayed again in his office before leaving.

The next day, we arrived at his office and were greeted by the most wonderful medical staff that we had ever seen.  Everyone there was so kind and gentle.  But the most shocking part for us was when Dr. Hickman came in to the surgical room and prayed over Travis and I before beginning the procedure.  I'm sure there are doctors that do this privately, but he prayed out loud asking for blessings upon us and our family and the guidance of his hands during this procedure.  And for God's will for our future as a Christian family.

Another huge blessing was that I was able to stay in the room.  The roles were reversed that day.  Travis was on the table, and I sat beside him holding his hand and comforting him during the entire procedure just as he had done for me during each one of my c-sections.  I was able to pray with him and for him and whisper in his ear assuring him that everything would turn out just fine.  I was able to tell him just how much I loved him and how proud I was of him for following God's calls even though they were both so absolutely crazy!  Dr. Hickman and his staff talked us through the entire procedure and made sure we were both comfortable at all times.

So fast forward almost two years after the surgery, we were living in the Philippines as full time missionaries and God had sent us another teenager to adopt.  Read about that here.  We had given up on the reversal working and had accepted that God had other plans for us.  Although we were both still saddened by the thought of never having our own baby again, we were still happy to have that huge weight lifted from our marriage and from our souls.

Being totally open to life, any life that He sent our way, freed us to be happy with whatever God had planned.  We were completely satisfied with our new life in missions, our house full of teenagers and soon to be teenagers, and our marriage was never stronger.  This journey had completely opened our line of communication with each other and had us totally relying on God's goodness and grace to overcome any issue that came our way.

Then I got sick.  Really sick. Thought I was dying sick.  I thought that I had contracted some kind of strange illness from the mission life.  I stayed in bed for days which turned into two weeks.  I had no strength to get up.  I could not stay awake if my life depended on it.  I had no appetite and was nauseated 24 hours a day.  I had never felt this sick in my entire life....except....the times when I was...... pregnant!

Yep!  Just when we had given up on a baby and accepted whatever God had planned for us, which we thought would be a life of adoption and fostering teens, He sent us a little miracle!

So without further ado, here's our newest little missionary miracle... 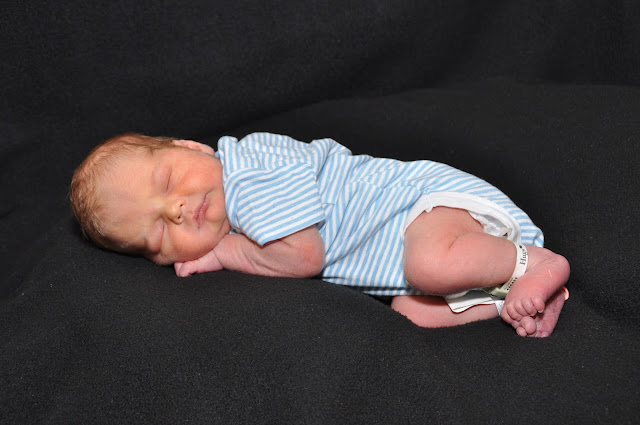 Luke was born in the U.S. on April 28th after our doctor in the Philippines suggested we head home to have the baby due to some medical issues I was having and the fact that it was my fourth c-section.  Both he and I have recovered, and our family is back in the Philippines ready to begin whatever crazy journey God has planned for us this time.

This little guy has no idea what kind of a crazy life he is in for with five teenage siblings, two "old" parents, and a life in foreign missions!

***Feeling led to a reversal? We HIGHLY recommend Dr. Mark Hickman and his wonderful staff.  Check out their website: http://micro-vas-reversals.com.