Water, Water Everywhere, But Not a Drop to Drink

We live on an island in the middle of the Pacific Ocean with lots of mountain springs and waterfalls.  We are surrounded by water, yet, a large number of people here do not have access to clean water to drink, cook with, water their crops, bathe with, etc.  Many people have to climb several kilometers up a mountain to the water source and carry buckets back down several times a day.  Sometimes there is a water source nearby, but it is under the mountain rocks and unaccessible.

Father Joe, the priest we work under, is working to provide water to as many people as he can on his beloved Camiguin Island with the help of unusual gift from God.  Father Joe has the "gift of finding water."  He can "sense" where water is in an area.  He then uses two sticks to find the exact spot.  He's explained it to us several times, but we wanted to see him in action.  So last week we loaded up and headed to one of the water source projects he has.

When we got to the end of the road, and I use the word road loosely, we were told we had a "little hike" up to the water source that Father had discovered some time ago.  Travis decided it might be best if he carried Luke in the carrier instead of me carrying him.  Best decision ever!  Once Luke was all strapped in, we were ready to hit the trail.  And again, the word trail is used very loosely. 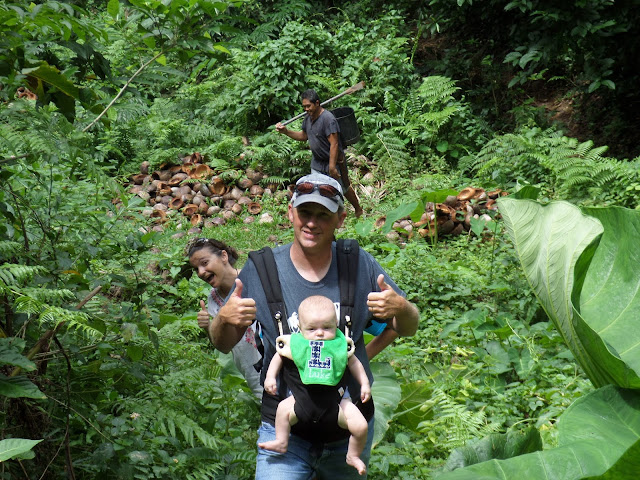 The journey up to the water source was tough for two old out of shape people who grew up in flat Louisiana.  We are not mountain climbers. We got left behind and resorted to playing "Marco Polo" with the rest of the gang.  Soon our "Marco" wasn't answered with a "Polo."  We were too far behind.  Thankfully Father Joe had told one of his workers to stay behind to help us old folks along.  He didn't speak English, but kept smiling and pointing with his lips (that's how Filipinos do it) each time we turned back to ask him which way. 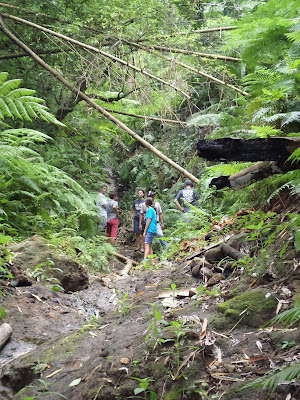 We finally reached the rest of the group at the water hole and were amazed at what we saw.  The men had dug through the rocky mountain to find a small spring.  The hole was about 8 feet deep.  They were emptying the hole with a bucket and pouring it down the mountain into a small pipe that they had run down the mountain. 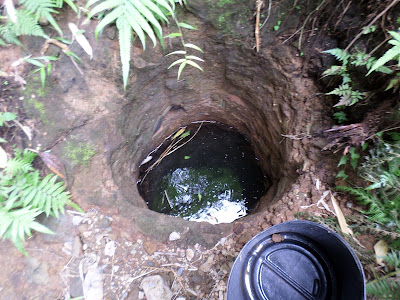 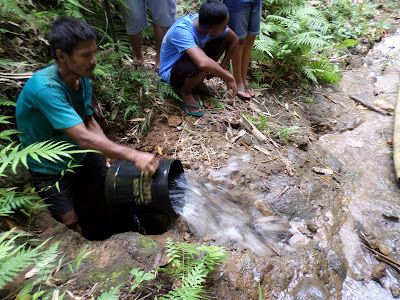 Here's a video showing what has to be done each day in order to get the water from the source to the farm reservoir.


You can see in the pictures below the bamboo that they had originally used before Father was able to buy the black piping.  This particular water system travels down the mountainside to water the crops on the farm that Father has to help feed and care for his parishioners. 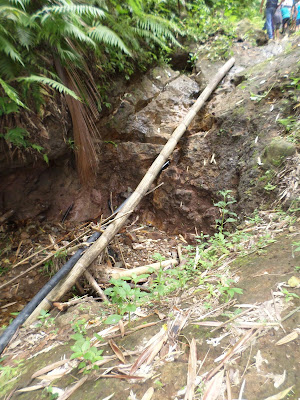 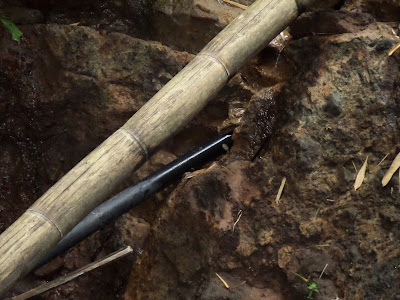 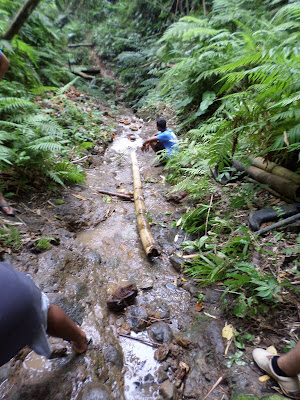 While at the site, Father told us that there is another larger water source higher up that they will try to get to soon since a long drought is predicted for this area in the coming months.  The majority of their crops were lost during last year's drought.  He wants to prevent this from happening again.

He also told us of several mountain communities that he has located the water for.  He just needs the piping to run the water down through and the tank to store the water in for the people of the area to use.  The total cost of the pipe and water tanks for these four communities is over $10,000.  As Pope Francis stated in his lastest encyclical Laudato Si', "access to safe drinkable water is a basic and universal human right, since it is essential to human survival and, as such, is a condition for the exercise of other human rights."

He also stated that it is our job to help provide safe drinking water to the poor.  "Our world has a grave social debt towards the poor who lack access to drinking water, because they are denied the right to a life consistent with their inalienable dignity. This debt can be paid partly by an increase in funding to provide clean water and sanitary services among the poor."

If feel called to help  with the Sagay Water Project, please visit our donation page or call Family Missions Company's office at 337-893-6111.


Posted by Melissa S. No comments: